Tanishq’s latest ‘Live a Dream’ collection found a perfect way to advertise itself through immersive advertising. The collection was launched through 3D Out-of-home billboards. The aim of the campaign was to surprise and amaze the viewers by transporting them in the world they never experienced before. This could be made possible through the installation of 3D billboards that created an optical illusion. This illusion was created through distorted projections which appear once the viewer enters a designated vantage point. Through correct lighting angels, perspective and shadows, the 3D visuals could be created that can be viewed by people without any special equipment like an eye-wear or mirrors.

The anamorphic illusion or anamorphosis is the latest technology that foretells the future of DOOH. The optical illusion created through the graphics gives viewers an immersive experience and transports them to a creative and dreamy world. The hyper-realistic 3D DOOH advertising was already making waves in countries like Japan, U.K, South Korea, U.S, Singapore and China. And it has made its debut in India with Tanishq’s latest collection. The first of its kind 3D DOOH screen was installed at the Promenade in Bandra, Mumbai. The advertising campaign was executed by Laqushya Media Group who created first immersive 3d anamorphic that blends realities and leaves the audience amused. The team focused on the brief that was given by Tanishq for the launch of its’ latest diamond jewellery collection- Live a dream’. The campaign was to be created on the same lines of making the audience live their dream through creative 3D visuals. The audience must feel that the diamond jewellery line is distinctive for its unique craftsmanship and resonate with their desires. The campaign had to be dreamy, eye-catching and engaging. Therefore, Laqushya Media group came up with this hyper-realistic 3D DOOH advertising which was first of its kind in India.

The 3d screen aimed at leaving the passers-by wonder-struck to something they have never experience before. The distorted reality mixed with optical illusion was powerful enough to engage them for longer duration and leave them excited of what they have experienced. 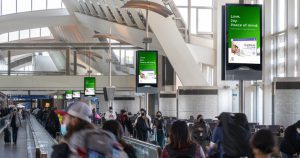